The Chicano Park gatherings can be intimidating to outsiders and disruptive to newcomers. Pete Ramirez introduces us to John Chavez, who wants everyone to feel welcome.

“We try to keep the scene going,” he says of his car club, Prophecy de Tejas. The group coordinates with other car clubs in the area to host free events at the park that include music, barbecue and, of course, beautiful vehicles of all kinds.

The smell of barbecued brisket and sausages permeates the park as all sorts of clean and shiny cars crawl along the two-lane road. If the pristine vehicles aren’t cruising, they’re parked in a row to showcase their features to all who pass by. Some of the lowriders use their hydraulics to raise one end of their cars, defying gravity and making them stand on three wheels.

John Chavez makes it his mission to continue the lowrider tradition 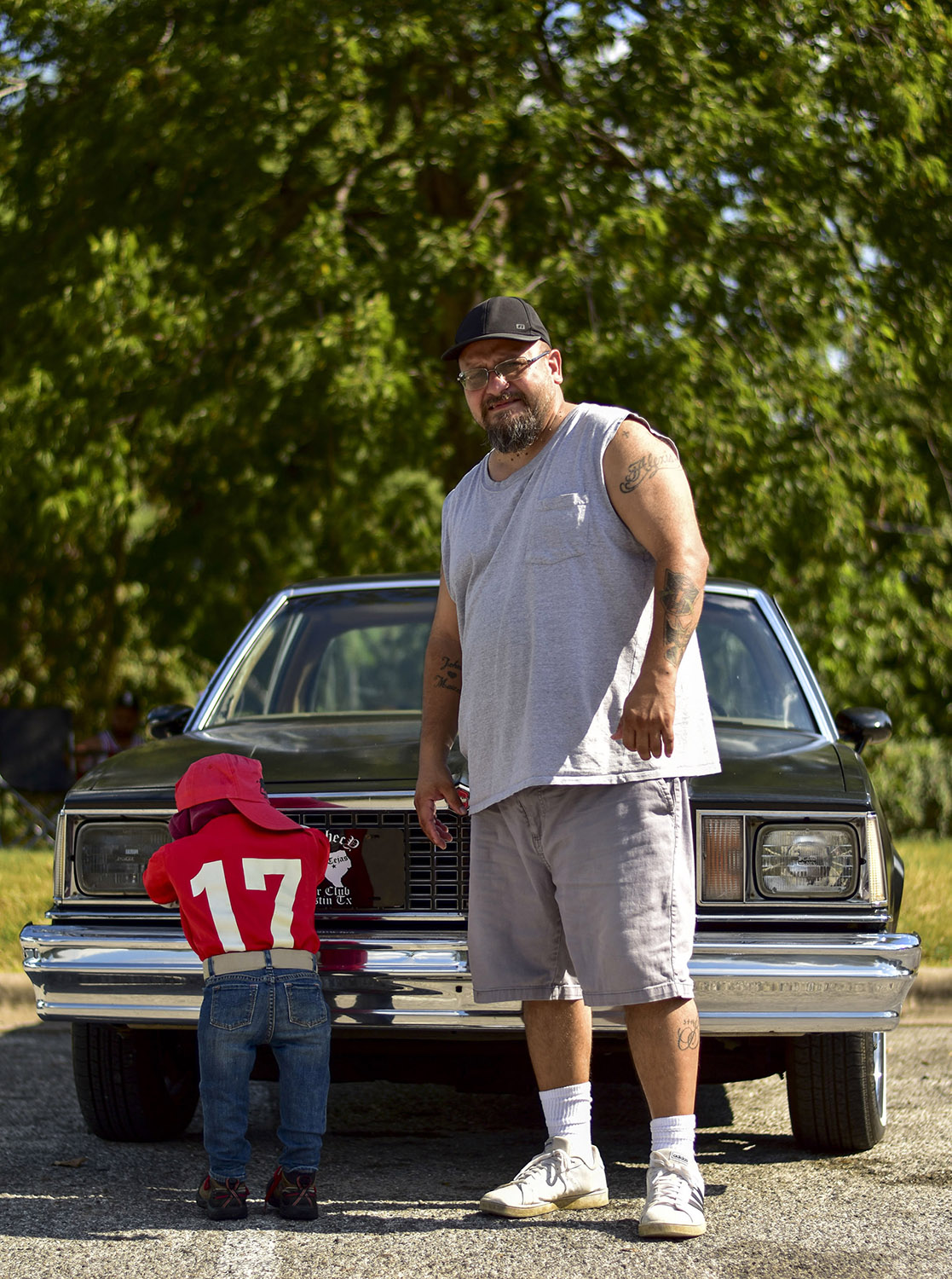 John Chavez stands next to his 1979 El Camino in Chicano Park in East Austin. The “monito” figurine leaning on the front end is meant to draw attention. (Photo by Pete Ramirez)

As president of Prophecy de Tejas, Chavez has made it his mission to welcome new people to the car scene and continue the lowrider tradition his father introduced to him as a young boy. Chavez thinks car culture should be open to everyone and that it’s a privilege to have the freedom to enjoy what he calls a classic American hobby.

“We have the opportunity to do a lot of things that a lot of other countries don’t,” he says. “We got a lot of freedom to enjoy.”

The festive atmosphere in the park during these weekend “chill and grills” is fueled by music. Most of the time it’s Tejano music. Sometimes it’s classic and modern hip-hop. But it’s always being played for the entire park to hear. With the right song, attendees are quick to hit the parking lot dance floor.

Some wealthy newcomers who aren’t familiar with the neighborhood’s Latino roots don’t exactly enjoy the weekly celebrations. They have complained to local authorities and news organizations about the gatherings being too noisy.

But Chavez wants to preserve the area’s long-held tradition. He makes an effort to consistently show up to represent the community that is being priced out of the neighborhood.

“We fix up our cars the way we want to and just come out here and have fun,” he says. “This is a lifestyle for us.”

As a boy, Chavez accompanied his dad as he cruised through the park.

“He had a Chrysler New Yorker that he would always keep clean and shiny when he came out here,” the now 45-year-old says.

After his father’s death in 2016, Chavez decided entering the lowrider scene would be the perfect act of remembrance and something he could pass down to his son. Over the next year, Chavez worked to find his place in the community.

“I was like, let me go ahead and just start doing this for myself, bringing this lifestyle for me and my kids, my family,” he says. Chavez says he plans to pass on his El Camino to his son as soon as he graduates from high school.

Within a close-knit community that might seem inaccessible, Chavez prides himself on his open-door policy. He wants to preserve the scene for future generations and sees it as his role to be available to young people who come out to admire the cars.

Chavez says being an American is a privilege that allows people to have the freedom to pursue, cultivate and enjoy a hobby like fixing up and showing off classic cars. He says the cars can bring a sense of unity within the community.

“It don’t matter what race you are, whatever,” he says. “Everybody likes a nice ride.” 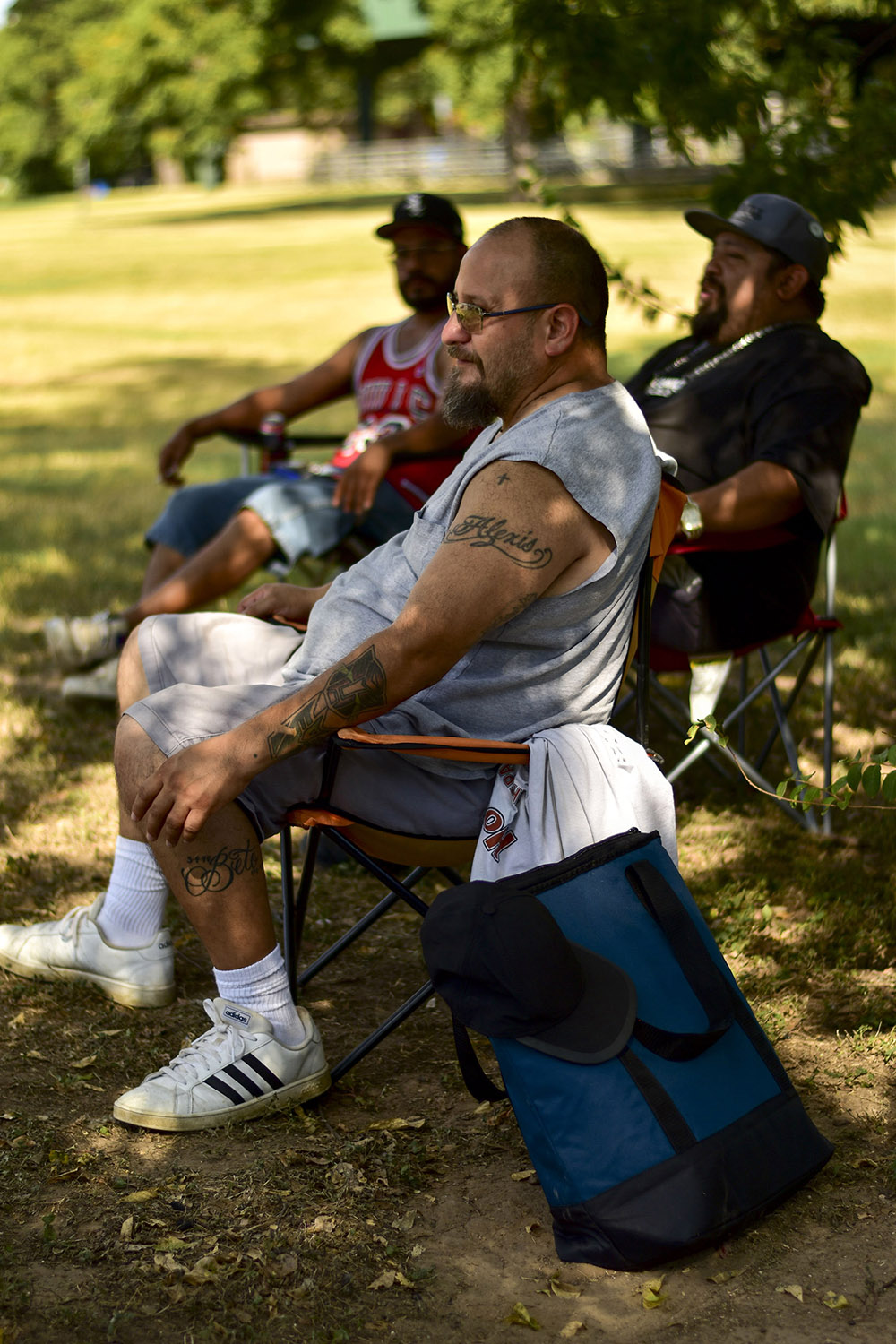 Chavez and his friends attend several different car shows and events in the area, but they are almost always at Chicano Park on Sundays. (Photo by Pete Ramirez)

The car club meetups in Chicano Park can get congested and rowdy. Chavez says he wants people who are interested in learning more about classic cars to feel welcome. (Photo by Pete Ramirez)