Fabiana Chaparro tells the story of Flash Gordon Parks. Through his documentaries, photography, DJ sets and vinyl collection, he has created a love letter to the city of Houston’s musical legacy.

For one Houstonian, a vinyl record isn’t just a record — it’s a gateway to escapism, history and a connection to his city and country.

As an ethnomusicologist, Jason “Flash Gordon Parks” Wood’s mission is to document the unknown corners of Houston’s music scene.

“We can all benefit from knowledge,” says Wood. “There’s no need to hide it.”

He believes in sharing the culture he has uncovered with younger generations. The most important thing he wants them to know: You can trace back almost all great American music to the Bayou City. It’s not only his work as a music historian that transmits this message. Woods is also a DJ, filmmaker, photographer and vinyl curator. 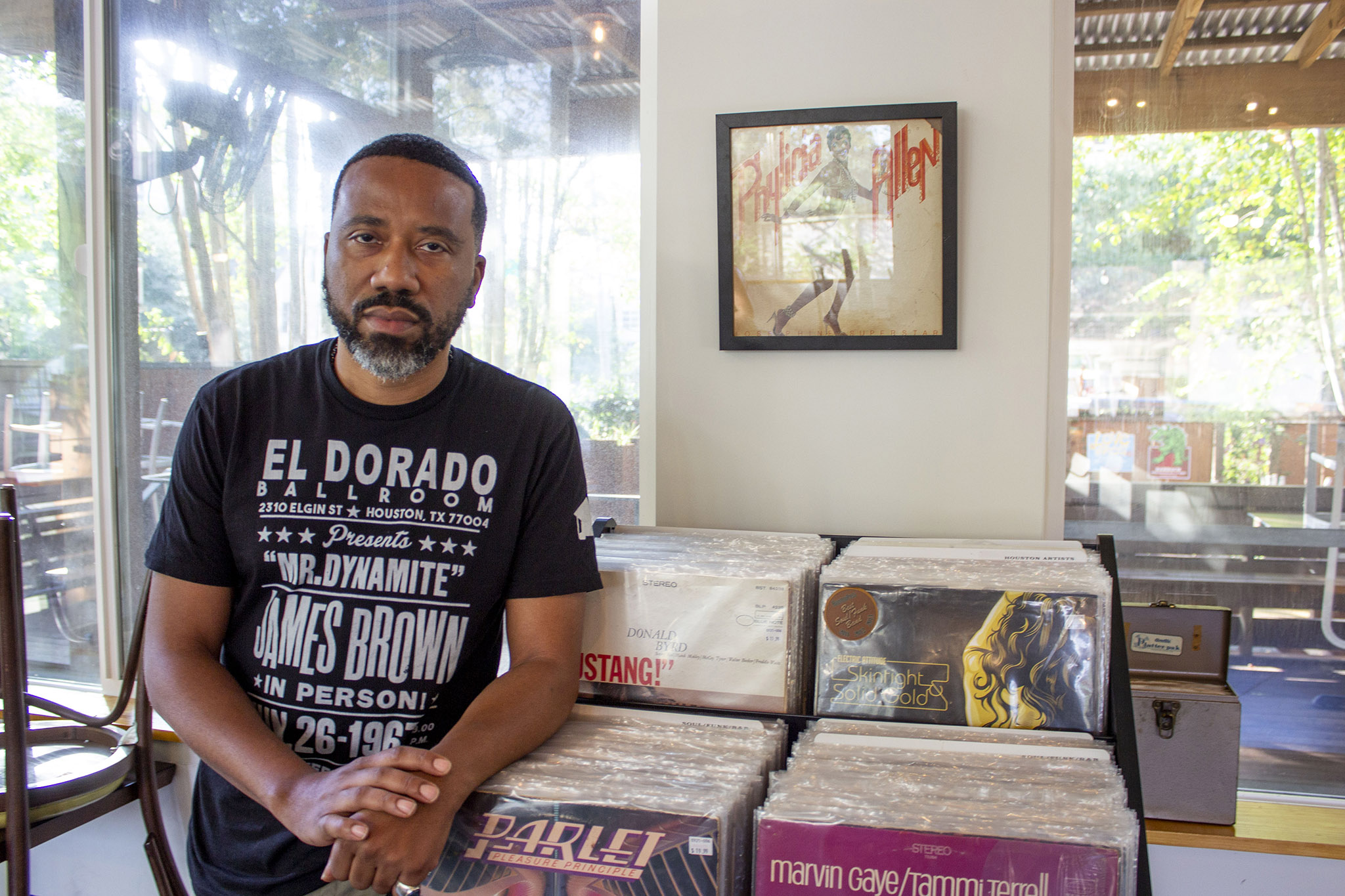 Houston native Jason “Flash Gordon Parks” Woods grew up surrounded by music. He continues to live in Houston, working toward building a historical narrative of America’s music scene and, often, its roots in Houston’s musicians. (Photo by Fabiana Chaparro)

Woods grew up in South Houston in the 80s, and remembers watching his mother, a schoolteacher, take photographs at every family function and vacation. He says he got his love for history from her.

“My childhood was filled with a lot of opportunities to be creative and be free,” he recalls. “Growing up with a lot of older people that told stories was part of my journey of just growing and learning.” 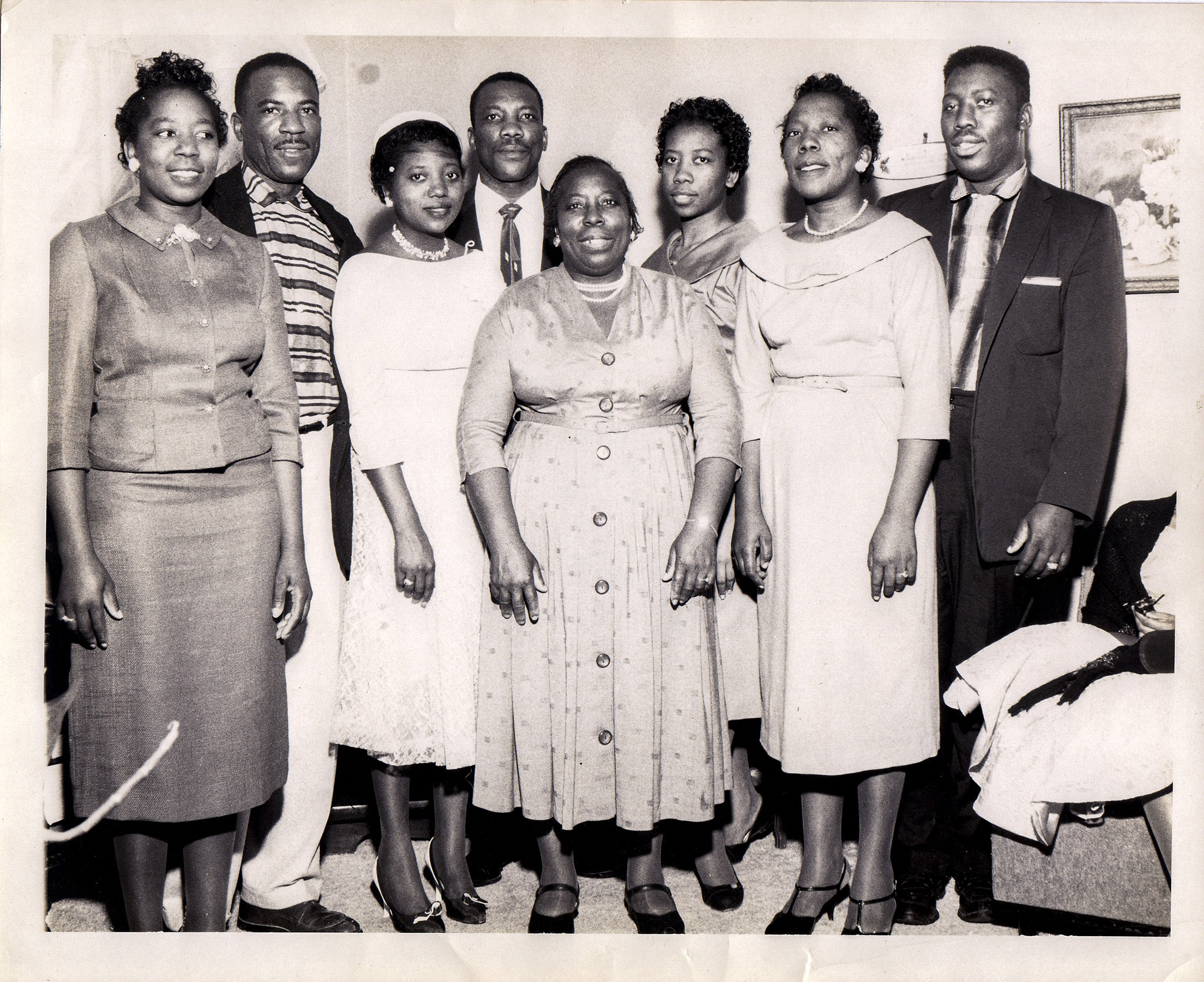 Woods’ family poses for a picture in their home’s living room. Originally from Louisiana, his family made Houston their home when they migrated there in the 1950s. (Photo courtesy of Jason Woods)

Camera in hand, he has spent more than 15 years documenting his wider neighborhood and its people through photography, documentaries and research on American music.

Woods’ research is also influenced by the legacy of the Great Migration, a period between 1916 to 1970 where African-American people settled in various cities in the south as the economy boomed.

“Naturally you have a sense of pride of where you come from and where your roots are,” explains Woods. “But I’m very well aware of the ills and the hypocrisy of America. I’m making the best of the situation.”

Woods’ work as an ethnomusicologist has meant unearthing the untold stories of Houston, including the many black artists who were marginalized and exploited by the music industry.

“It’s important to me to tell the stories of people that probably didn’t benefit to the maximum of what they should have had during their heyday,” he said. “Some people get an opportunity to get a second chance, to get appreciated years after. Some people don’t. Some people leave this Earth never really knowing how much they were loved.”

For Woods, to “give people their flowers” and let them know others appreciate their work is key. He thinks that’s the least he can do for the artists who shaped his childhood, present work and future legacy.

“Sharing black stories is very important because, like most things in America, black people have been a critical part in the development of this country,” said Woods. “We know that American music is black music, there’s no way to get around it. The primary colors of music are gospel, blues and jazz, which are all American forms of music created by black people.” 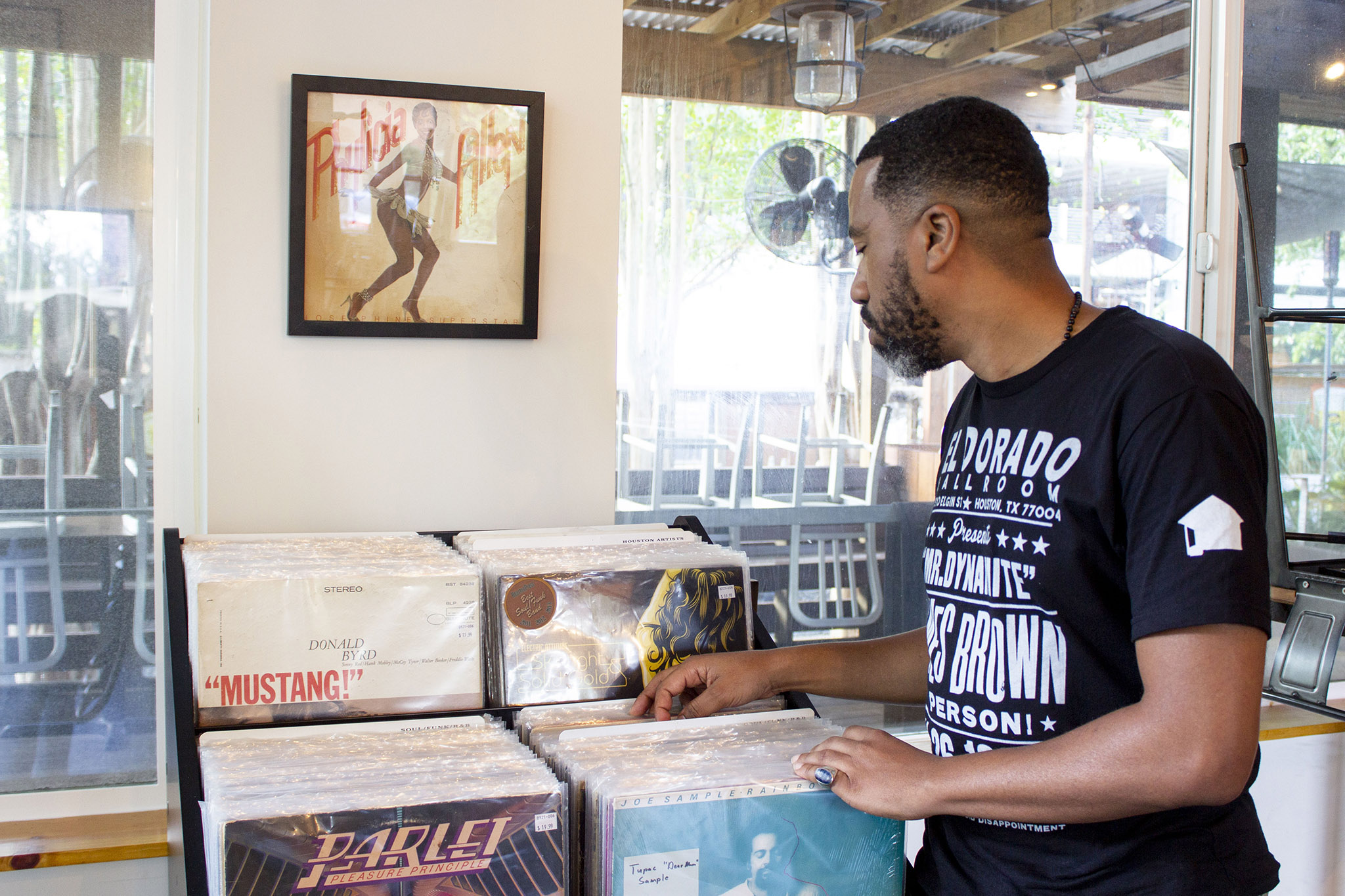 Woods thumbs through the vinyl collection at Mo’ Better Brews, where he works as vinyl curator for the restaurant. The owners asked him to come work with them after the restaurant’s opening this year on Juneteenth. (Photo by Fabiana Chaparro) 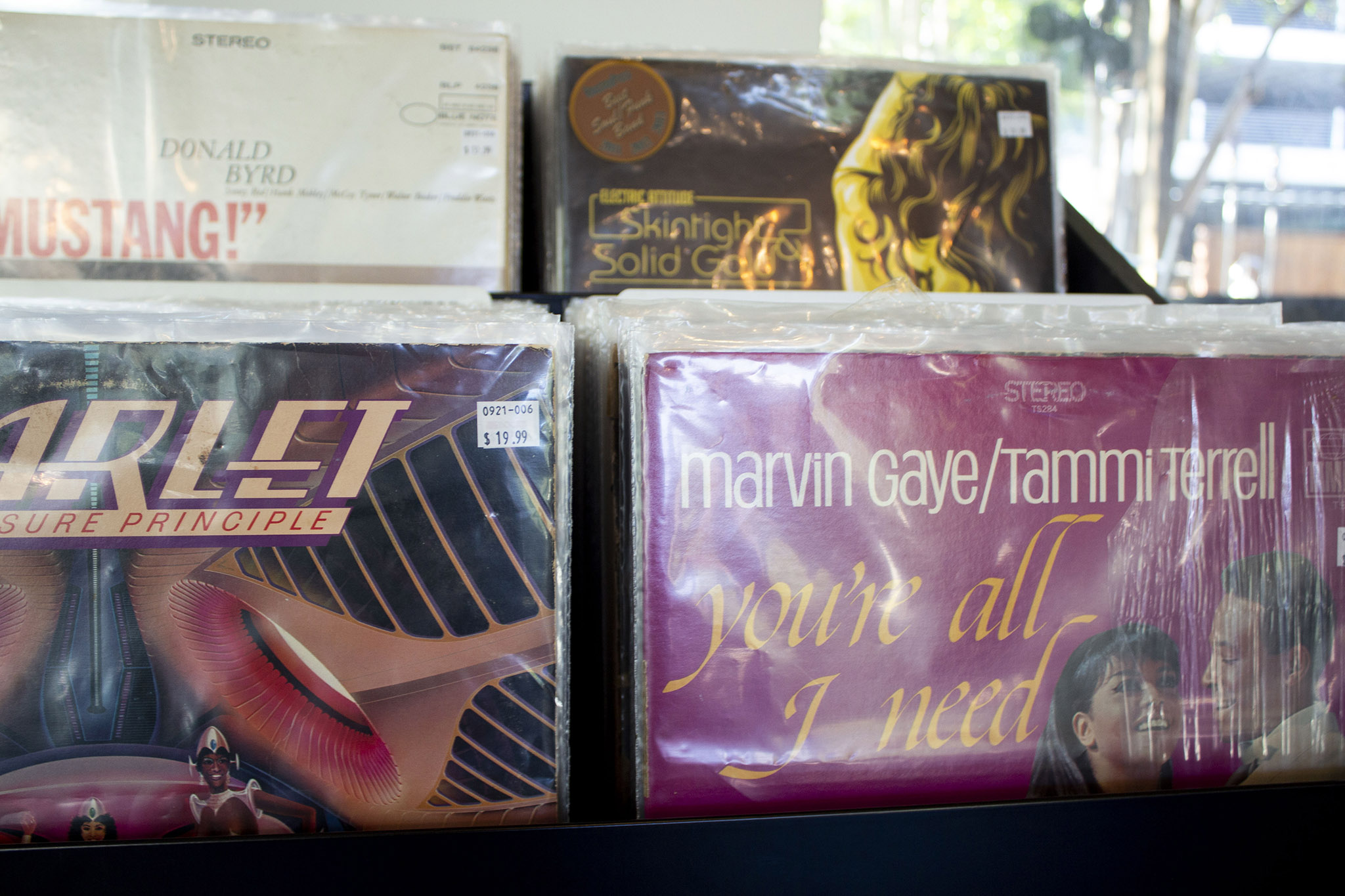 The vinyls in the restaurant all come from Woods’ personal collection, which reaches up to thousands of records. He rotates the records displayed at Mo’ Better Brews every season. (Photo by Fabiana Chaparro)

Woods now also works as a vinyl curator at the vegan breakfast restaurant, Mo’ Better Brews, which stands under the shade of a quaint yard overlooking the glass buildings of midtown Houston and its metro rail. The restaurant was opened this year on Juneteenth by the founders of Houston Sauce Company.

The owners had been collaborating with Woods for four years, and asked him to work with them to create a black-owned business that promoted a lifestyle they all loved.

“It’s the opportunity to share some of Houston’s music history with the patrons, and to expose people to various Houston artifacts,” he says.

Woods has over ten thousand records in his personal collection, amassed over 20 years. His passion for both music and education have led him to share this music with the public. Self-discovery, he notes, can come in a cheap record player spinning some old blues.

“Records held so much information at one point. That’s how they got it across,” he says. “Whether people were giving a speech, playing music or recording how to do aerobics — through records, you can go back and sort of see what the world was like.” 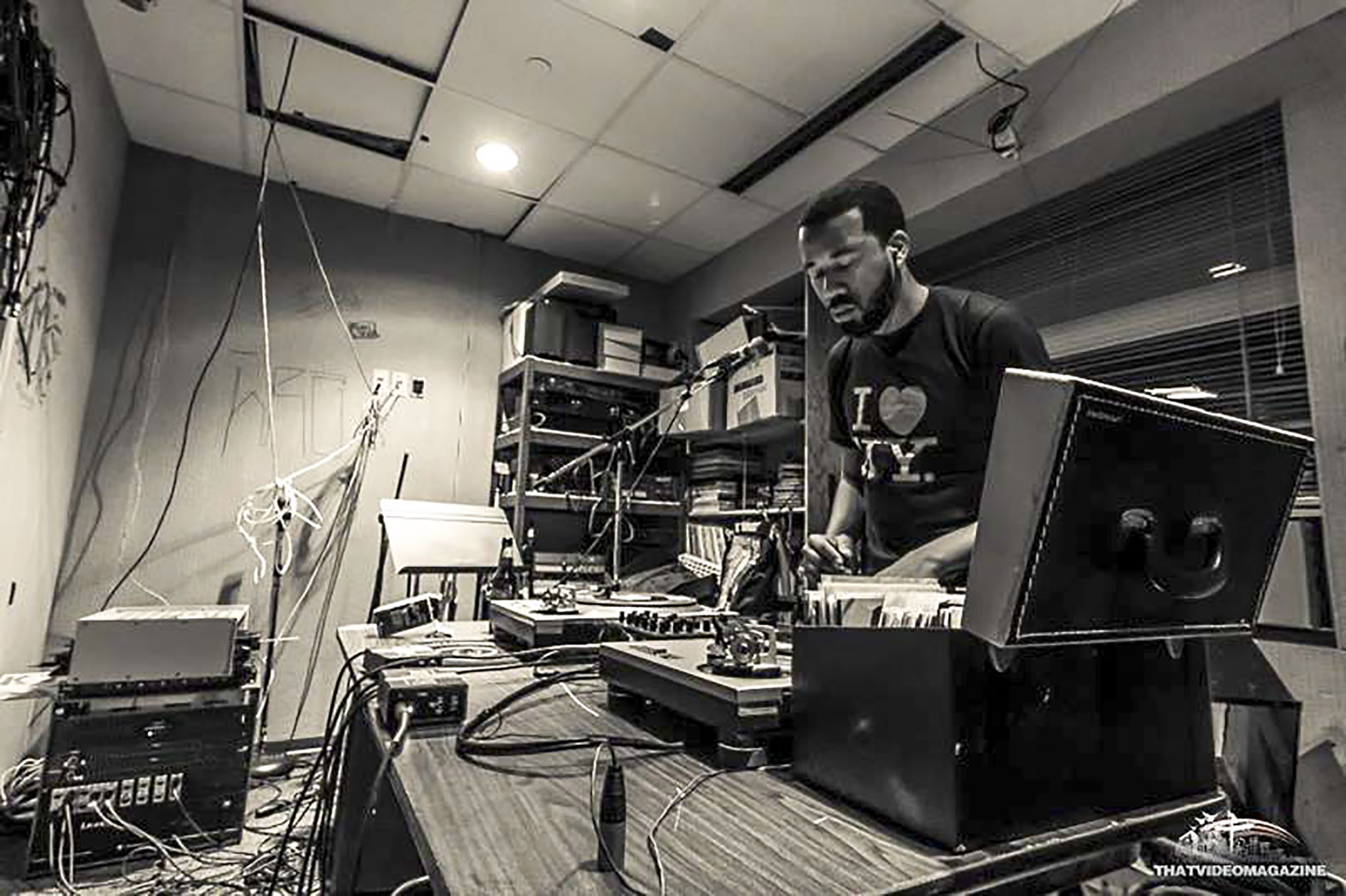 Woods deejays in his personal studio. Over the years, he has maintained several DJ residencies that range from Blues to Jazz to Soul/Funk to Hip-Hop. (Photo courtesy of Jason Woods)

As Woods continues to cultivate a vast network of evidence showing Houston’s presence in nearly all American music genres, he has one motto to keep him grounded: think globally, act locally.

Woods hopes to be an inspiration for the next generation of Houston creatives. He draws connections between what his grandfathers played and what the youth today listen to — he notes that a lot of the artists that young people respect come from a lineage of great musicians, such as Ray Charles or James Brown.

“There are people that already did this for us, who laid a great foundation. We just have to hold the torch up,” he says. “At least, that’s how I usually approach it.”