​​Sofi Gonzalez has competed in karate for 16 years. She’s been kicked and punched – and has bled more times than she can count. But as a dual citizen, the toughest part of competing hasn’t been the injuries, as Jackie Ibarra reports. It’s picking which country to fight for.

Split between two countries: Mexican-American martial artist must choose which colors to wear

When Sofi Gonzalez stepped into the ring at the 2019 Pan American Games, she almost looked like every other martial arts fighter.

She had sparring gear strapped on, a mouthpiece in and a belt tightened around her waist. But instead of a matching uniform, Gonzalez hopped out in a Team Mexico jersey and Team USA bottoms — representing both of her countries’ colors.

“I just remember getting my name called to one of our fighting divisions, and I couldn’t make a decision. So I put on the USA pants and a Mexico top,” Gonzalez said. “And I remember this girl from Tennessee, she yelled at me and she was like, ‘Sofi, that don’t match,’ [and] I was like, ‘I know,’ But I felt comfortable doing it.”

In a way, Gonzalez’s uniform did match.

As a citizen of both the United States and Mexico, Gonzalez belongs to both teams and both countries. That hasn’t always been easy. Her life has been about blending — literally and figuratively — blending uniforms, cultures and identities.

In that blending, it can be hard to figure out what it means to be an American.

“Sometimes people that have that dual citizenship that feel like they pretty much belong to both places, you might as well feel like you don’t belong anywhere,” she said.

Gonzalez moved to California from Mexico City with her mom in 2012. At 17, she was about to start her senior year of high school in a foreign country with almost no family or friends.

“I remember being in Mexico, I would be out with friends almost every day. It was friends, karate and homework. That was it. That was my life and it was great,” Gonzalez said. “And then I come here and I don’t know anyone.”

She understood English, but because she wasn’t fluent she didn’t really want to talk to anybody.

Coming to California meant leaving everything behind — friends, family members and the karate school she’d attended since she was 11.

“It was really heartbreaking. A lot of times, you know, just comparing those two and seeing the difference, like – Oh, my life in Mexico City and now my life here. Even though I’ll have a lot of opportunities, at what cost, you know?” she said. “Most of my family is away, and it felt lonely.”

Gonzalez became a dual citizen three months after moving to the U.S. Although she was officially an American on paper, she didn’t feel like one. When holidays like Thanksgiving or the Fourth of July rolled around, she felt uneasy.

“It’s been very nice of [my friends here] to let me celebrate with them,” she said, “but at the same time, I don’t have the same feeling as if I were celebrating Independence Day, quince de Septiembre.”

But when she moved to Texas, everything changed.

At 18, Gonzalez came to train under Luis Jimenez. Her sensei taught her how to teach kids karate and how to run a dojo. He introduced her to the tournament circuit and encouraged her to compete with Team USA. 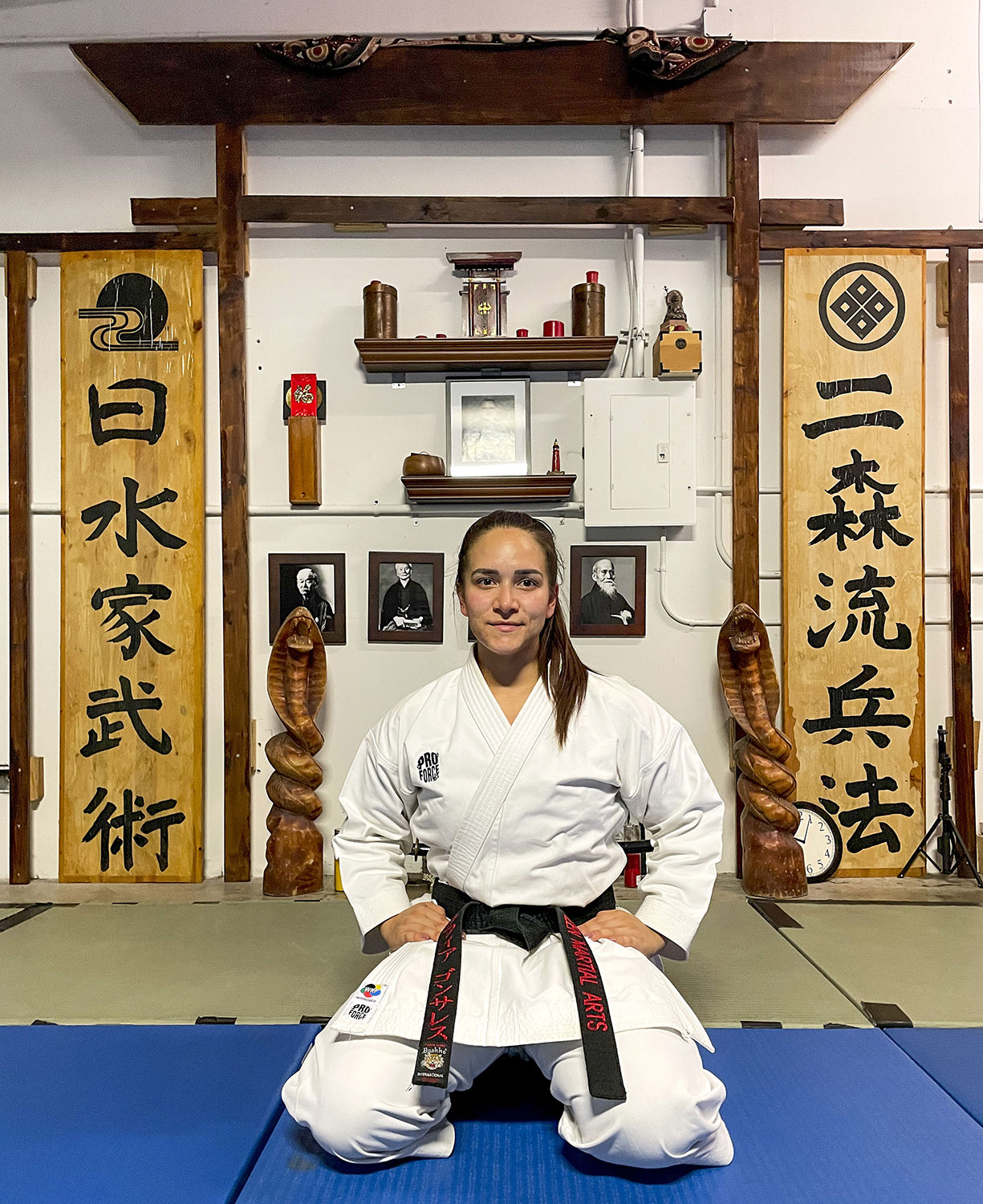 Sofi Gonzalez sits in her dojo, Martial Arts of Austin, where she trains in different styles of karate. Gonzalez says she considers herself a “sun up to sun down martial artist.” (Photo by Jackie Ibarra) 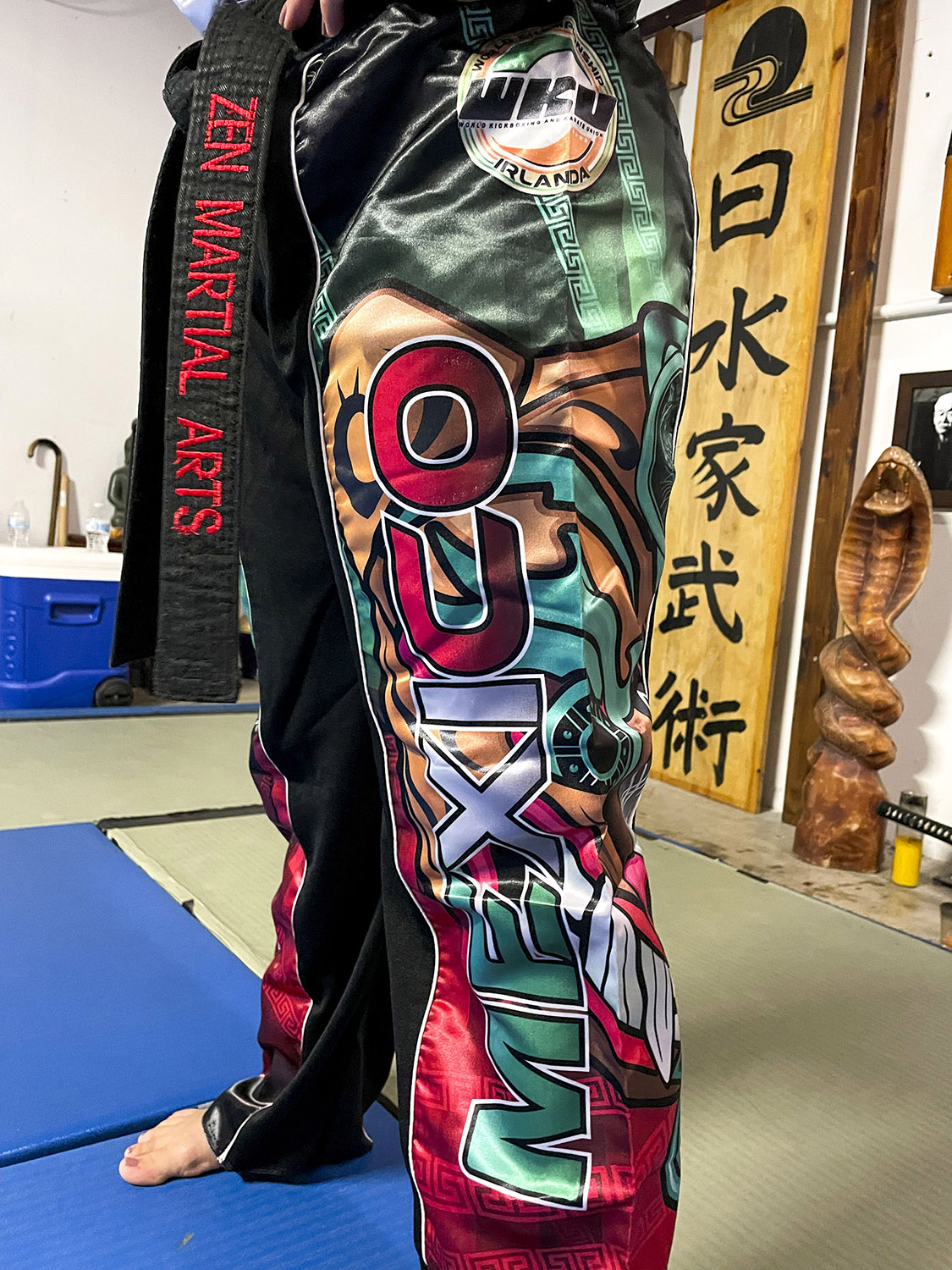 Gonzalez wears her Team Mexico pants. She says she doesn’t get to wear the uniform often but would love to compete in red, green and white colors more. (Photo by Jackie Ibarra)

Gonzalez wasn’t expecting to spar in a team fighting division, let alone with Team USA. But she did fight, and it was the first time she felt included in the U.S.

“I started feeling proud because when I came here, I didn’t even want to accept being an American. I was holding on to my Mexican customs and my culture,” she said. “At that time, I was not accepting my new citizenship.”

It was on the podium with her teammates, the American anthem blaring and an American flag wrapped around her, that she finally “felt part of something for the first time in a long time.”

Since winning a gold medal with the U.S. in 2016, Gonzalez has built a strong relationship with Team USA and has represented the country ever since.

But every year when her sensei, who runs Team Mexico, asks her to compete with them she says no.

“Sometimes people that have that dual citizenship that feel like they pretty much belong to both places, you might as well feel like you don’t belong anywhere.”

“I have friends on Team Mexico that have been wanting to come for competitions, and they are not granted the opportunity to even come visit the country,” she said. “And me having that opportunity – it does make me feel a little tiny bit guilty.”

Her USA teammates joke that she can always join the other team.

“It makes me think that – Oh, if I were to go to Team Mexico instead of Team USA this year, would they feel betrayed?” she said.

Her friends in Mexico give her a hard time, too.

“They’ll try to play around with me … [like] ‘Oh, look at this American girl,’ and when I go over there, “Oh, do you know what tacos are or just Taco Bell?’” she said. “And they just do it to play around with me. And I joke around with them, too. But at the same time, like, really, really deep inside, it does bother me a little bit.”

Throughout the years, Gonzalez has been pushed and pulled by both sides of the border to answer a loaded question: What are you?

So in 2019, she took matters – and uniforms – into her own hands and decided to show she was both.

“I felt a lot of satisfaction knowing that having both teams on my side, it meant that no matter where I go, I will have people in my corner,” she said. 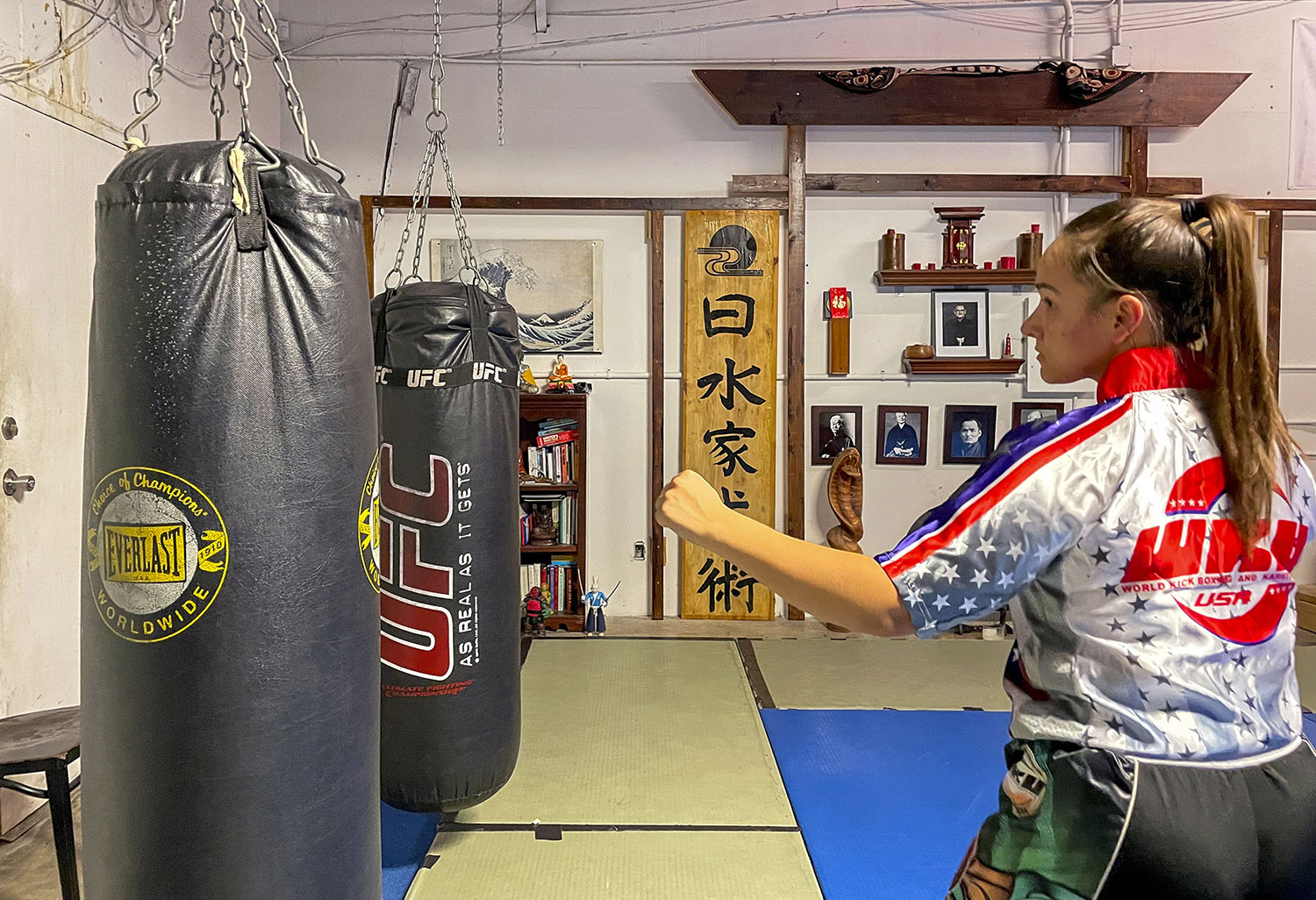 Gonzalez poses in front of punching bags in her mixed uniform, highlighting her blended identity as a Mexican-American martial artist. (Photo by Jackie Ibarra)

Tournaments continue to be like family reunions for Gonzalez.

In one place, she’s able to see and cheer for both of her teams, both sides of her family. But when it comes time for Mexico and the U.S. to face off, she gets stuck.

“I’ll just stand in the middle, like not in the ring, but outside of the ring, right in the middle and just cheer for both,” she said. “And I’ll just watch and stay quiet because I don’t want to make it seem like I’m only on one side.”

Gonzalez still isn’t quite sure she knows what it means to be American yet. For now, she knows it involves a lot of blending.

Sometimes it’s mixing colors on a world stage. Other times it’s blending languages and cultures in the United States.

“My accent is not something that I want to lose  and I try to educate people as much as I can on … Mexican holidays or Mexican food,” Gonzalez said. “I try to share my culture as much as I can … so I don’t lose it. I feel like it’s just like an artist. If an artist doesn’t paint for a long time after 10 years, if they grab the brush again …  they won’t feel comfortable with it.”

Other times she says it’s blending what she’s learned from her sensei to pay it forward to children. Gonzalez is a teacher with Kickstart Kids, a nonprofit program founded by Chuck Norris to bring martial arts into public schools around Texas.

As a teacher, Gonzalez has been able to pass down her passion and knowledge to the newest generation of martial artists.

“I think that’s the biggest thing that I can do for this country,” she said. “Just helping change kids’ lives and helping make them good citizens.”