Under a new Texas law, anyone who helps someone obtain an abortion after six weeks — including driving them to a clinic — could be sued. As Mizelle Mayo reports, that puts Rachel Carter at risk. She’s a full-time volunteer with an Austin-based nonprofit providing reproductive resources and services.

“I really started to see a general decrease,” says Carter. “And more trepidation in the voices of the people that I was helping.”

Under the new Texas law, anyone who helps someone obtain an abortion after six weeks — including driving them to a clinic — could be sued for a minimum of $10,000. That puts Carter, a full-time volunteer with The Bridge Collective, at risk. The Austin-based nonprofit provides reproductive resources and services to Central Texans, including rides to abortion appointments.

“This law makes me feel like I’m doing something wrong when I know I’m not,” Carter says.

Carter’s life has informed and strengthened her commitment to accessible reproductive health care for all. She credits her experiences attending women’s marches as a girl, facing discrimination in school and serving in the U.S. Army as fueling her activism in adulthood.

She says the new law won’t deter her.

by Mizelle Mayo | Next Generation Radio | The Texas Newsroom| September 2021 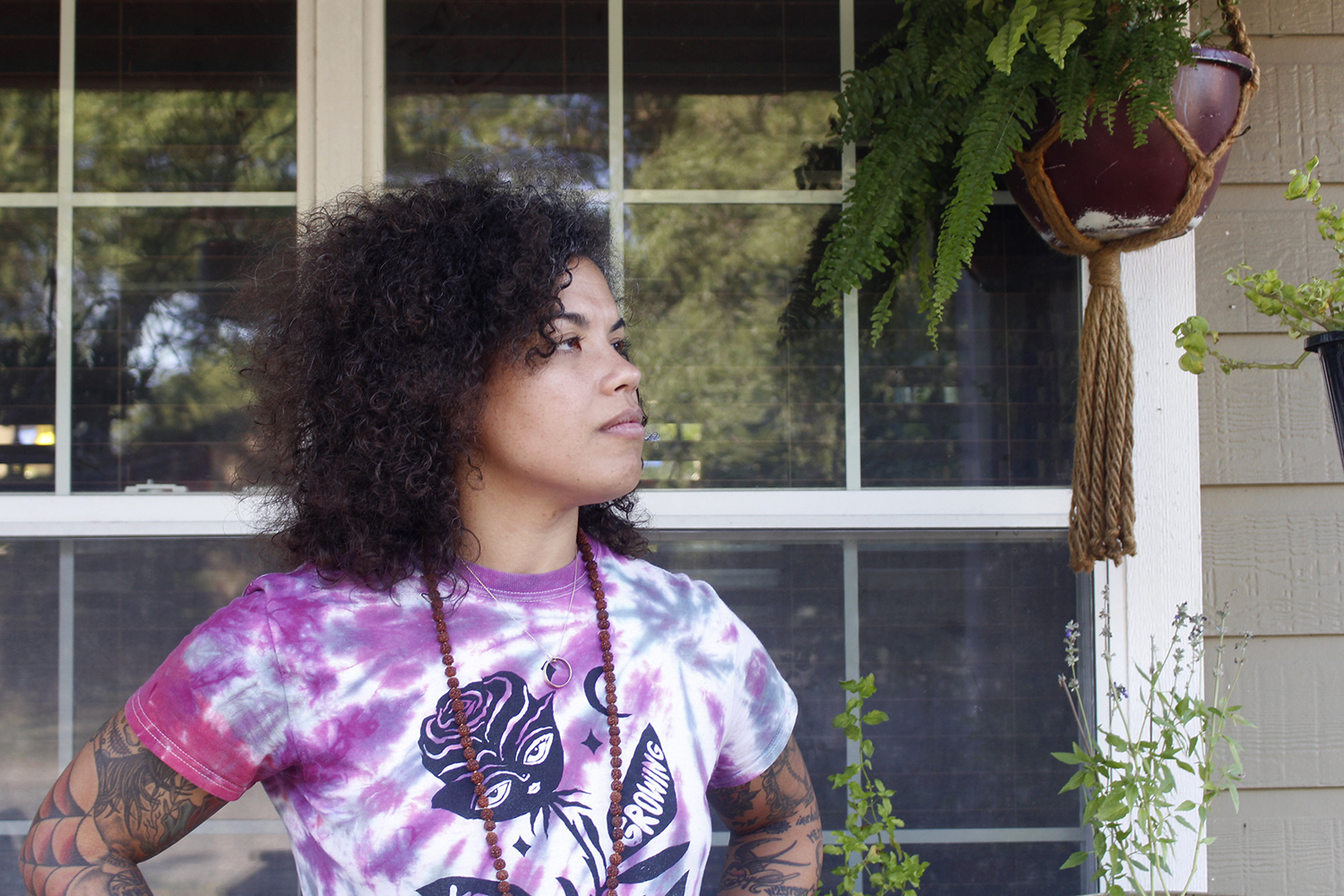 Rachel Carter, 31, stands in front of her house in East Austin surrounded by the plants she grew during the pandemic. (Photo by Mizelle Mayo) 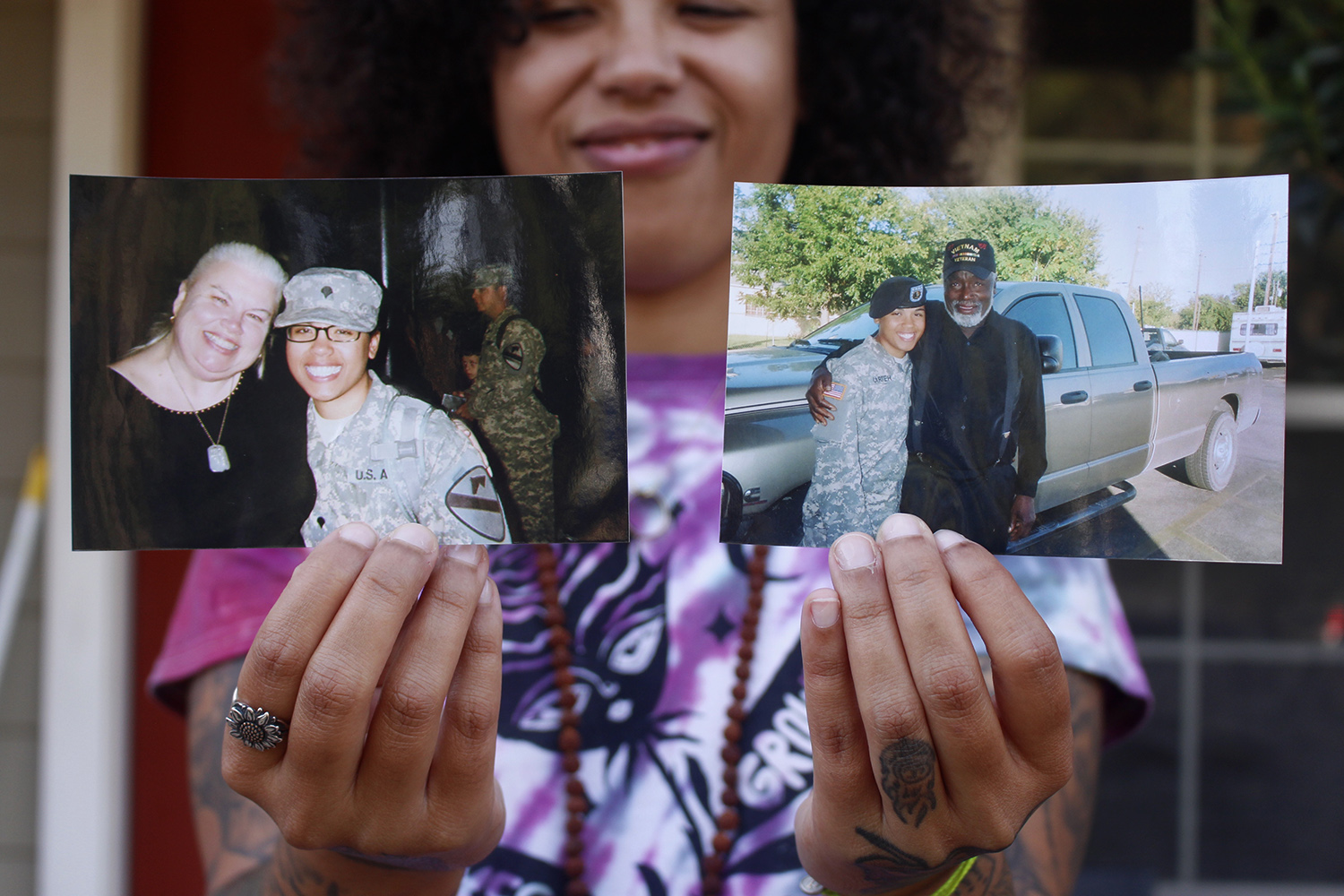 Carter holds two photos of herself posing with her parents. The first with her mother (left), Rhonna “Sissy” Carter, was taken after she returned from Iraq in 2011. The second with her father, Thomas Carter, was taken during the Warrior Leader Course Graduation in 2011. (Photo by Mizelle Mayo)

Carter’s mom, Rhonna “Sissy” Carter, took her to women’s marches when she was a baby and instilled feminist values, like equality, in her daughter. Carter saw her mom as a role model and followed in her footsteps. She learned about the history of women’s rights. Carter even remembers having stickers with the word “Now!” in bold letters plastered on her bedroom wall — imagery used by feminists in the ’70s calling for reproductive rights.

At school, she faced discrimination. As early as third grade, Carter remembers being confronted with the intersectional oppression that comes with her biracial identity. Kids refused to play with her.

But her mom always taught her to respect others. Carter recalls her mom saying “Don’t come from a place of hate. Even if you’re angry, you can come at it from a place of more empathy and compassion.” 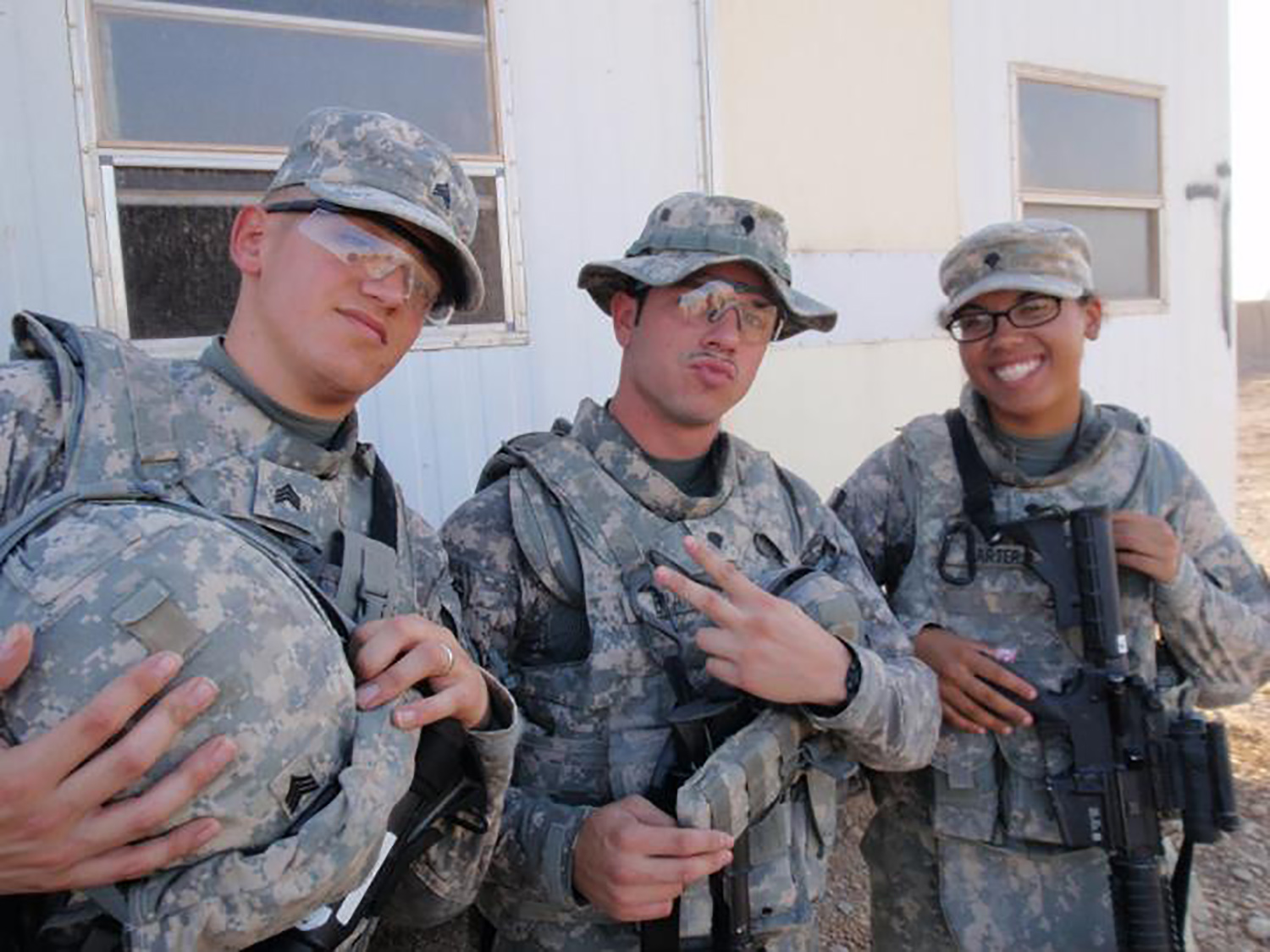 Carter poses with fellow troops during her deployment to Iraq in 2009. During one of her first missions, she remembers other soldiers teasing her about being the first one to “fall out.” But she says no one bothered a male soldier who also fell out due to heat exhaustion. (Photo courtesy of Rachel Carter)

As a former self-described “bad kid,” Carter wanted to change the direction of her life. After high school, in April 2009, she joined the U.S. Army.

She remembers speaking up about sexual harassment in Iraq, but said that resulted in no repercussions for anyone. Instead, she faced questions about how she wore her clothes.

After a year in Iraq, Carter was deployed to Afghanistan. That tour, she says, was different. She was more confident.

“I definitely felt like I had more power … more say so over my bodily autonomy,” she says.

“Afghanistan kind of fixed what was wrong with the Iraq deployment for me. I was able to speak up when I was being harassed, and something was done about it.”

Carter left the Army in 2012, transitioned back into civilian life, and tried out college for a while.

“I wanted to go to college to be a professor of women’s studies. So, I think that is me just kind of making 15-year-old Rachel really proud.” she says.

Then, in 2020, Army soldier Vanessa Guillén was murdered in Fort Hood, Texas. Carter reflected on the sexual harassment she experienced and witnessed in the Army. This ignited more passion in Carter and convinced her to shift her focus to reproductive rights.

With a renewed outlook, she joined The Bridge Collective earlier this year as a full-time volunteer. Before the new Texas abortion law went into effect, her days included connecting people to reproductive health services or driving them to abortion appointments.

Pre-SB 8, Carter says she could barely count on her fingers how many people she drove. Now, she says, “it seems like we’re getting a lot less requests. It started to decrease a little bit before SB 8 as well.”

As she continues her activism, Carter says she’s counting on the love and support of those close to her. 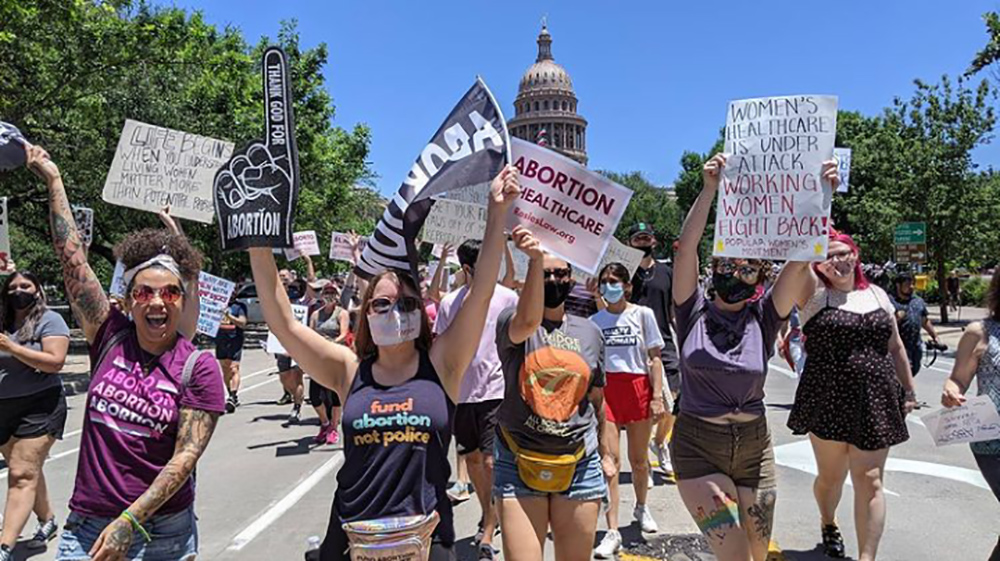 Carter and other volunteers from The Bridge Collective, a nonprofit advocating for reproductive justice, march from the state  Capitol to Texas Gov. Greg Abbott’s mansion in Austin in 2020. This was the first protest Carter participated with The Bridge Collective during a women’s march. (Photo courtesy of Rachel Carter) 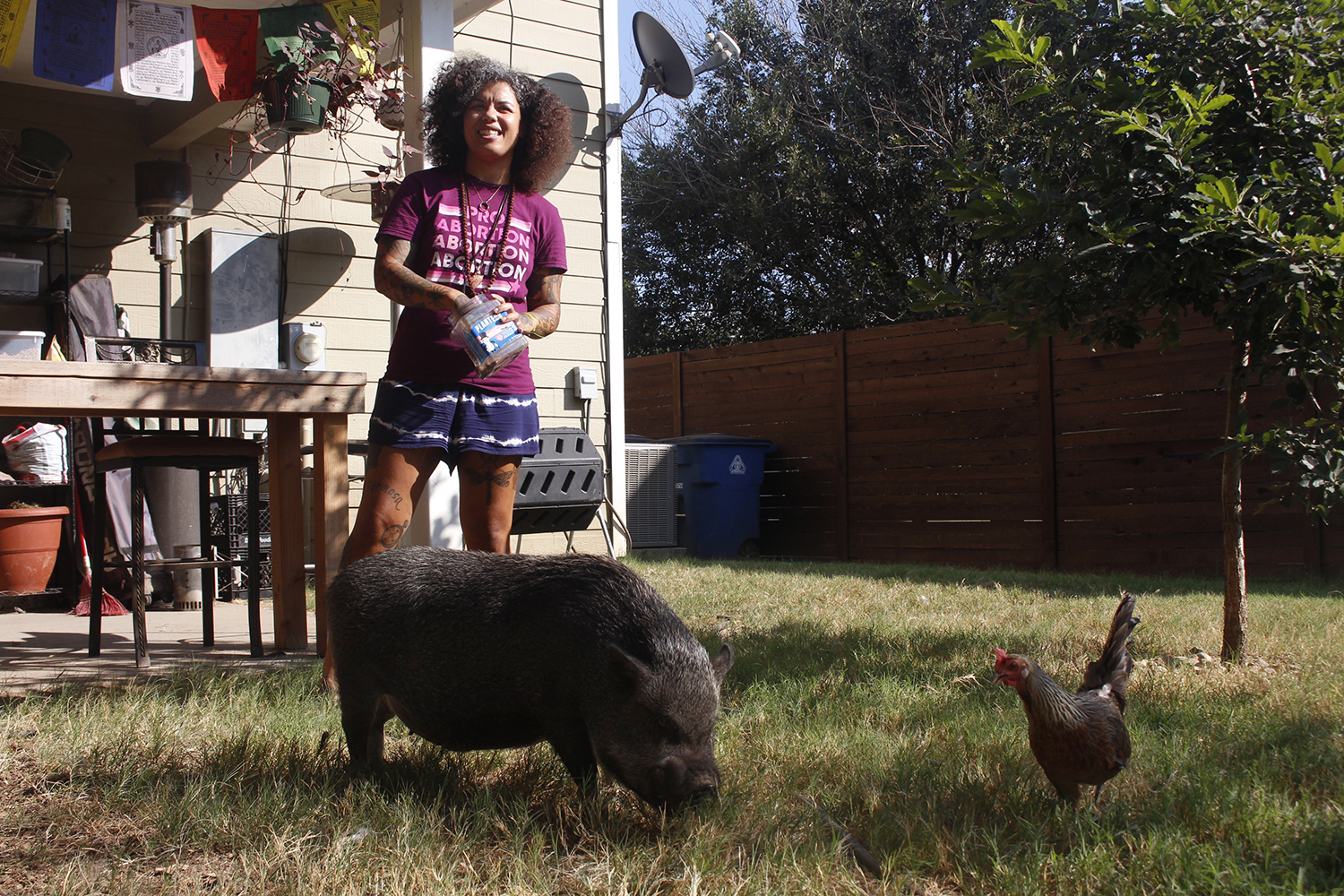 Carter in her backyard in Austin. When she’s not advocating for reproductive rights, she likes to focus her energy on yoga and tending to her farm animals and plants. (Photo by Mizelle Mayo)

She also welcomes everyone she knows to embrace feminist values.

“Now, I’ve learned that it’s not just women’s rights. Especially when it comes to reproductive rights in Texas,” Carter says, acknowledging the progression of women’s rights to include the rights of all genders and identities.

“So now, it’s more people’s rights when I think about fighting for reproductive rights.”